Availability: Out of stock

ASK FOR QUOTATION
Add to wishlist This Mac mini is powered by an 8th Gen Coffee Lake 3.6 GHz Intel Core i3 Quad-Core processor, while 8GB of 2666 MHz DDR4 RAM helps to ensure smooth multitasking and also allows the computer to quickly access frequently used files and programs. The system memory can be upgraded to a maximum of 64GB.

Integrated Intel UHD Graphics 630 delivers a sharp, clear picture, and you'll be able to output video to an external display using the system's Thunderbolt 3 ports, which feature native DisplayPort output, or use the built-in HDMI 2.0 port. Up to three 4K displays are supported between any two Thunderbolt 3 ports and the HDMI port or you can connect one 5K display and one 4K display.

For storage of your files, this Mac mini is equipped with a 128GB PCIe SSD that has a sequential read speed of up to 3.4 GB/s. If you want to add external peripherals, four Thunderbolt 3 ports support bi-directional transfer speeds of up to 40 Gb/s, while also supporting 10 Gb/s USB 3.1 Gen 2 (USB 3.1), device charging, and an external GPU. Thanks to two 5 Gb/s USB 3.1 Gen 1 (USB 3.0) Type-A ports, you'll still be able to connect other devices to this system. Gigabit Ethernet is built in for wired networking, or use dual-band Wi-Fi 5 (802.11ac) for wireless networking. Bluetooth 5.0 technology will allow you to connect additional compatible peripherals, including keyboards, mice, and headsets. Sound is output using a 3.5mm headphone jack. Apple's Mac mini (Late 2018) operates using an internal 150W power supply that runs off 100-240 VAC at 50 to 60 Hz.

This Mac comes preloaded with macOS. Updates can be downloaded for free via the Mac App Store. Please check Apple's website for upgrade eligibility. 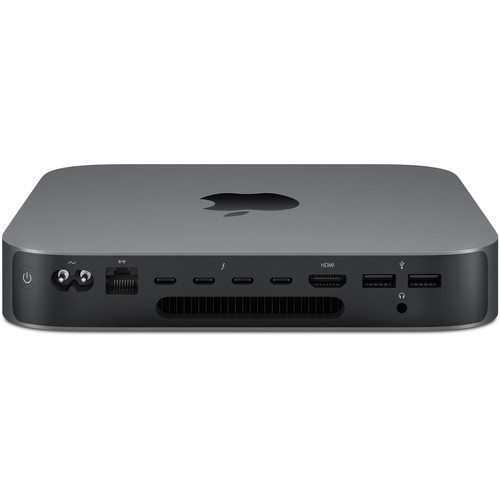 In addition to being a great desktop computer, the Mac mini powers everything from home automation to giant render farms. And now, with an 8th Generation 3.6 GHz Intel Core i3 Quad-Core processor and Intel UHD Graphics 630, the Mac mini has even more computing power for industrial-grade tasks. So, whether you're running a live concert sound engine or testing your latest iOS app, the Mac mini is the shortest distance between a great idea and a great result.

Climb In, Geek Out

The Mac mini features 8GB of high-performance 2666 MHz DDR4 SO-DIMM memory for faster rendering, working with massive files, or running multiple virtual machines. And now you can configure even more memory - up to 64GB - to run even heavier workloads.

This Mac mini has a 128GB PCIe SSD with sequential read speeds of up to 3.4 GB/s, so you can load giant files and launch apps quickly.

The Mac mini features the Apple T2 Security Chip, a second-generation custom Mac silicon designed by Apple to make the Mac mini even more secure. The T2 Security Chip consolidates several controllers into one, and includes a Secure Enclave co-processor that provides the foundation for encrypted storage and secure boot capabilities.

With a variety of ports, the Mac mini is ready for a variety of workflow configurations. Thunderbolt 3 is powerful and versatile, and the Mac mini has four of them. The HDMI 2.0 port delivers more bandwidth than its predecessor, so you can enjoy faster frame rates. For wired network access, take advantage of the integrated Gigabit Ethernet port.

Thunderbolt 3 gives you some productive possibilities. Transfer data at up to 40 Gb/s, charge and power external devices, connect up to two 4K displays—and even a third with HDMI 2.0—or one 5K display. Or, pair your Mac mini with an eGPU for desktop-class graphics performance.

Your Mac mini comes with 90 days of complimentary technical support and a limited 1-year warranty. Purchase AppleCare+ for Mac to extend your coverage to three years from your AppleCare+ purchase date and add up to two incidents of accidental damage coverage, each subject to a service fee of $99 for screen damage or external enclosure damage, or $299 for other repairable damage, plus applicable tax.

To the Desktop, and Beyond

Because of its size, performance, and wide array of ports, the Mac mini goes where no Mac has gone before. And now, with even more cores packed into its 7.7" square frame, you never know where you'll find a Mac mini—or dozens of them—hard at work.

Build and Render Farms
The faster 2666 MHz DDR4 memory in the Mac mini is ideal for batching out massive Xcode builds or rendering and compressing video.

Xcode Server
A 3.6 GHz Intel Core i3 Quad-Core processor and fast I/O connectivity make the Mac mini a solid Xcode companion to build your apps quickly while running automated tests in the background.

Live Performance
With its 128GB PCIe SSD, fast performance, and small footprint, Mac mini becomes a live musical instrument with MainStage on some of the world's largest concert tours.

Digital Art and Signage
From performance art to immersive digital billboards, the Mac mini drives some of the biggest and brightest digital displays with its powerful processor, high-performance memory, and fast, versatile I/O.

HDMI 2.0 Display Video Output
Support for one display with a 4096 x 2160 resolution of 60 Hz with DVI output using a separately-sold HDMI to DVI adapter.
Brand
Apple